Cutting to the heart of their differences, President Barack Obama and Republican Mitt Romney laid out contrasting visions for the federal government in their first debate in Denver, sparring over tax-cut proposals, regulations and deficit-reduction plans.

Both candidates sought Wednesday to present themselves as champions of the middle class and cast the Nov. 6 election as a choice between two paths toward a more-secure economic future. Rather than the bitter personal attacks that have consumed much of the campaign, the debate was relatively cordial and heavy on policy specifics.

Mr. Obama argued for federal spending on education and new energy sources and said that Mr. Romney’s approach, which he described as cutting taxes for the wealthy and rolling back regulations, had failed to boost the economy in the past.

Mr. Romney cast Mr. Obama as a champion of big government and spending who would raise taxes on job-creating small businesses, calling his approach “trickle-down government.”

The two candidates exchanged sharp critiques of each other’s policies but remained respectful. When Mr. Obama used some of his opening time to wish his wife, who was seated in the audience, a happy 20th wedding anniversary, Mr. Romney responded with a joke: “Congratulations to you, Mr. President, on your anniversary. I’m sure this was the most romantic place you could imagine—here with me.”

It was one of the rare lighter moments in a high-stakes debate just one month before the election. Mr. Romney entered the debate seeking a burst of momentum after a bumpy month for his campaign that included the disclosure of a secretly recorded videotape of him telling campaign donors that 47% of Americans depend on government and see themselves as “victims.”

In an instant poll conducted by CNN, two-thirds of respondents said they believed Mr. Romney won the debate, with a quarter saying Mr. Obama had won. Some analysts, even those sympathetic to the president, said Mr. Romney had advanced his cause.

Mr. Romney “almost certainly did himself some good,” said Bill Galston, a former adviser to President Bill Clinton who is now a senior fellow at the Brookings Institution. “He conveyed a sense that was more human, more empathetic.”

Brendan Daly, a former aide to House Democratic Leader Nancy Pelosi, said: “I thought Romney did do well on style. Obama was flat….On points, Romney did well, but he’s behind, and I’m not sure this was enough to close that gap.”

In the debate, Mr. Romney inched toward the political center, offering a stark break from the red meat he had offered conservative voters in the GOP primaries and, at times, in the general election. He sought to soften his image after months of the Obama campaign casting him as a sharply partisan figure with little regard for the American middle class.

Romney advisers were candid about their belief that Mr. Romney needed a strong performance to better compete in the closing stages with Mr. Obama, who holds a consistent but fragile lead in most nationwide polls and in some battleground states.

The way the candidates answered questions showed their core differences on the role of government in the economy, in particular on whether the government or the private sector can best provide health care for Americans.

Both sides steered clear of their harshest attack lines, a bid to appeal to independent and other swing voters who will play a big role in deciding the election. Mr. Obama didn’t mention Mr. Romney’s 47% comment or his tenure at private-equity firm Bain Capital, both of which have been a focus for the Obama campaign. Mr. Romney did not mention Mr. Obama’s remark suggesting small business owners “didn’t build that” by themselves. 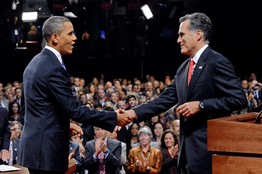 Michael Reynolds/Associated Press
President Barack Obama and Mitt Romney at the end of the
Denver debate, which focused on economic policy.

Toward the end of the debate, the former Republican governor sought repeatedly to present himself as an experienced bipartisan negotiator, an implicit critique of Mr. Obama’s own, similar promises in 2008.

Some of the sharpest exchanges during the 90-minute debate at the University of Denver came over policy, in particular taxes, with Mr. Romney at one point appealing to the moderator for more time, saying, “Virtually everything he just said about my tax plan is inaccurate.” At many times, the debate delved into policy specifics of the kind rarely seen on the campaign trail. The candidates discussed Medicare revamps, the role of small businesses in the tax code and the progress of setting regulations on mortgages.

A proposal by Mr. Romney to cut tax rates for all income brackets provoked an extended discussion. Mr. Obama said the cut would deprive the government of $5 trillion in tax revenues, mostly from the wealthy.

“I’m not looking to cut massive taxes and to reduce the revenues going to the government,” Mr. Romney responded. “My number one principle is there’ll be no tax cut that adds to the deficit.”

Mr. Obama shot back that Mr. Romney couldn’t cut taxes and cut the deficit without shifting the burden to the middle class. “For 18 months he’s been running on this tax plan, and now, five weeks before the election, he’s saying that his big, bold idea is ‘never mind,’ ” Mr. Obama said.

Mr. Obama repeatedly defended his handling of the economy. He is facing re-election amid tepid economic growth and with the nation’s unemployment rate stuck above 8%. A majority of Americans still say the nation is on the wrong track, even while signs of economic optimism have begun to sprout.

“We’ve begun to fight our way back,” Mr. Obama said. “But we all know that we’ve still got a lot of work to do, so the question here tonight is not where we’ve been but where we’re going.”

Mr. Romney, synthesizing the core of his campaign for the White House, said later in the debate: “We know that the path we’re taking is not working. It’s time for a new path.”

The candidates’ electoral challenges were apparent as they laid out their policy ideas. Mr. Romney, trailing in public opinion surveys in Ohio—a battleground state vital to both sides—and lagging behind Mr. Obama among female voters, spoke of a jobless woman from Dayton who had grabbed his arm asked him for help. Mr. Romney also talked about his support for the coal industry, which is important to parts of Ohio.

Mr. Romney, who has been cast by Democrats as disconnected from working Americans, forcefully rebutted the president’s claim that the Republican wants to cut taxes for the wealthy.

“I’m not going to reduce the share of taxes paid by high-income people,” Mr. Romney said, speaking directly to Mr. Obama, who was looking down taking notes. “They’ll do fine whether you’re president or I am.”

The candidates agreed the corporate tax rate is too high, but proposed different ways to fix the problem. When discussing Social Security, the popular retirement program for seniors, they agreed that current retirees should be shielded from any changes.

To tackle the deficit, Mr. Romney said he would make government more efficient and cut programs that weren’t worth the cost. The president sought to convince voters Mr. Romney wasn’t serious about cutting the deficit because he wouldn’t consider raising taxes.

Seeking to exploit a potential weakness for the Republican ticket, Mr. Obama invoked his late grandmother as he said Mr. Romney’s plans to overhaul Medicare would ultimately put the insurance program at risk by turning it into a voucher program.

“Then, what you’ve got is folks like my grandmother at the mercy of the private insurance system,” Mr. Obama said.

Mr. Romney said his plan would ensure a solvent future for Medicare and said there were merits to a private option.

“My own view is I’d rather have a private plan,” Mr. Romney said. “I’d just as soon not have the government telling me what kind of health care I get.”

It was a theme of the night for Mr. Romney, who extolled the virtues of the private sector as well as his own personal experience in business, a message aimed at persuading voters he would be a better steward of the economy. At one point he told the president: “You said you get a deduction for getting a plant overseas. Look, I’ve been in business for 25 years. I have no idea what you’re talking about.”

The two exchanged barbs on the appropriate level of financial regulation, as Mr. Romney took aim at the Dodd-Frank financial overhaul, which he wants to repeal and replace with new forms of regulation, the details of which are still unclear. “This is the biggest kiss that’s been given to New York banks I’ve ever seen,” Mr. Romney said of Dodd-Frank. “It’s killing regional and small banks.”

Mr. Obama responded: “Does anybody out there think that the big problem we had is that there was too much oversight and regulation of Wall Street? Because, if you do, then Gov. Romney is your candidate.”

Mr. Obama also said Mr. Romney hadn’t given voters details on his policy ideas, such as what regulations he would propose to replace the Dodd-Frank law and which tax deductions he would scale back in order to pay for his proposed tax cut.

“He now says he’s going to replace ‘Obamacare’ and assure that all the good things that are in it are going to be in there and you don’t have to worry,” said Mr. Obama, referring to the health-insurance overhaul he had signed into law. “And at some point, I think the American people have to ask themselves: Is the reason that Gov. Romney is keeping all these plans to replace secret because they’re too good? Is it because that somehow middle-class families are going to benefit too much from them? No.”

Mr. Romney repeated his call to repeal Mr. Obama’s signature health-care law. In a shift from the stance he took during the Republican primary, Mr. Romney embraced the health-care plan he passed as governor of Massachusetts that brought near-universal insurance coverage to the state. He cited a key difference between his and Mr. Obama’s law was that the Massachusetts law had bipartisan support. “I think something this big, this important has to be done on a bipartisan basis,” Mr. Romney said. “We have to have a president who can reach across the aisle.” Mr. Obama said his health-care plan originated with a Republican idea—Mr. Romney’s legislation in Massachusetts. 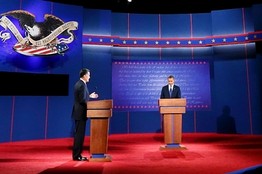 The first presidential debate of the campaign took place at the University of Denver;
Jim Lehrer moderated.

“We used the same advisers and they say it’s the same plan,” Mr. Obama said, comparing his federal health-care plan with the Massachusetts version, both of which contain an individual mandate opposed by many conservatives.Maryland Gov. Martin O’Malley, a Democrat, said that Mr. Romney failed to produce the game-changing moment his campaign needs. “He’s the one who needs to change the dynamic in this race,” Mr. O’Malley said.

The Romney campaign expects the Republican candidate to get a boost simply by appearing side-by-side with the president, projecting the image of the two men as equals.

The debate precedes an eagerly awaited jobs report on Friday, one of two before Nov. 6. Mr. Obama’s aides view Friday’s jobs report as important as the one that will be released the Friday before Election Day, given that several battleground states, including Iowa and Ohio, have already begun casting votes.

Both candidates will be back on the campaign trail this week. Mr. Obama will hold events in Wisconsin and Virginia, while Mr. Romney will campaign in Virginia and Florida.